So the weather could have been better. We were hit by what the media are calling the ‘mini beast from the east’ – the temperature dropped to around freezing just for the two days of the craft fayre, with a wind chill of six degrees and snow over ice on the roads, so no-one with any sense would decide to go out to a shopping village off un-gritted roads to spend their pennies.

Thankfully some hardy souls did come along, and we managed to recoup about half of the stand fee over the two days. Some of our fellow stallholders didn’t make a single sale all weekend, and we eventually all packed up at 3pm on Sunday rather than waiting until 5. My feet have never been so cold, even with double sockness. 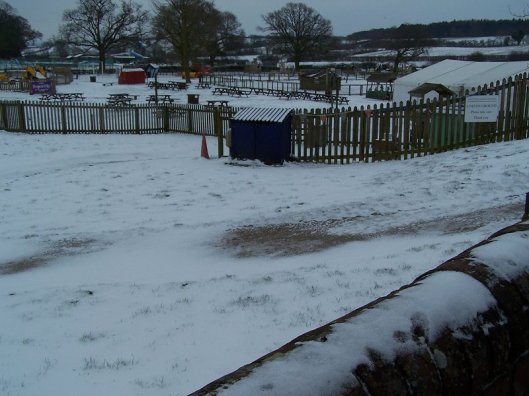 My husband completed my new super dooper mug stand late the night before the show, and it looked amazing so I need to show it off. Here you are. 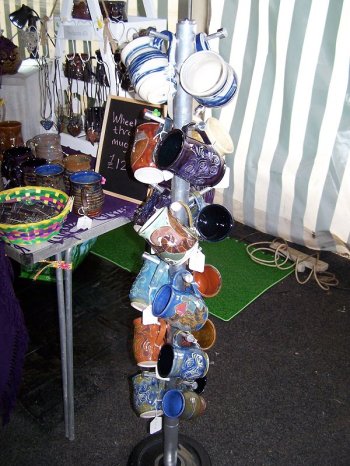 I’m definitely going to try again, maybe at a warmer time of year, but this was a good trial run.

Here it comes, the Easter Fayre at Hatton Shopping village, the one that I booked in a fit of enthusiasm when I first decided that Parsnip Pottery was going to be a real thing. It’s this coming Saturday and Sunday, two weeks before Easter and on the days when the temperature is expected to drop a few degrees after a relatively warm week. Better wrap up warm! Thank goodness it’s in a marquee.

Seven boxes of pottery packed, including a LOT of mugs because I’ve been trying to achieve perfect mugness over the past couple of months. With luck and reasonable weather we may make enough money and shelf space to let me carry on making and learning for another few months.

My amazing other half is busy making me some floor standing mug trees, just hoping he manages to get them finished in time for Saturday. 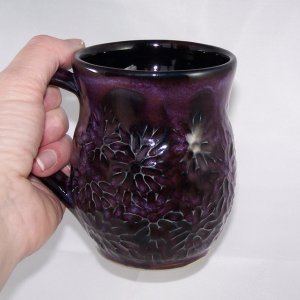 I’m telling you, I had such a good holiday period. So much playing with clay, I made a load of mugs that are just now going through the kiln, a couple of teapots that are drying very very slowly because I’m so nervous that they will crack. Right now I’ve got 11 goblets in the bisque kiln. I’ve tried to make goblets before and they weren’t ideal, but I’ve got the hang of it now.

The first of the latest mugs are now on Folksy, so we’ll see if anything sells. 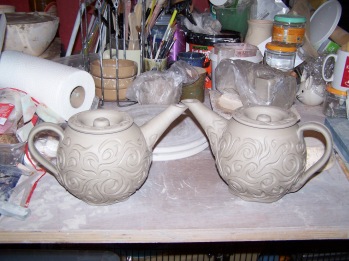 Today was the day of the Midlands Rat Club Christmas Show, with my first venture out for Parsnip Pottery. We had a reasonable day’s sales, although visitor numbers were depleted by the threat of more snow this weekend. Even Santa couldn’t make it as he was snowed in at home – you would think he’d be used to it!

My display needs a little work, I’m sure it could look better than that, but the pots themselves were well received. The best sellers were not surprisingly the rat mugs and the rat ornaments. Thank you to all my new customers.

The next few days will be taken up by the updating of my website so I can sell online. Then I can work out how to post the pots without breakages. Onwards we go.

Parsnip Pottery is turning into a real thing. My stall is booked at the MRC Christmas Show and I’m in the process of organising a craft fair booking for Easter as well. This hobby is here to stay if I can make it self-supporting. I’m making pots that my friends, at least, are asking to be able to buy, and I’m running out of box-space to keep the production to date, so the obvious thing is to begin selling. The website and facebook page are set up, and I’m planning to open a Folksy shop once the MRC show is over.

These cups are my favourites to date, and they were so much fun to decorate I can see myself making many more. Pots ahoy! 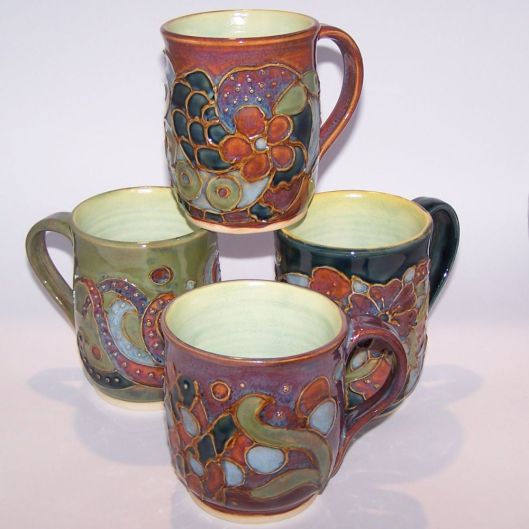 So we’ve got a bit of catching up to do, haven’t we? On the Saturday of last weekend I went on a three hour pottery throwing course at The Ceramics Studio in Ettington, which was so, so useful. I learnt such a lot in those three hours that on Sunday I went back to their website and booked another session for next month. I wanted to try out throwing on a sit down foot controlled wheel rather than my hand controlled desktop jobbie. The same yet different is the conclusion. The new term of college pottery lessons has also started, so I’m using the wheel there. No instruction there though, as the tutor is taking the class through making coil pots, but we can use the wheels if we know how.

I’ve also been making some more of the slab built ratty ornaments to take to the Midlands Rat Club Christmas show in December. I had some requests on Facebook to turn them into tea light holders, but it just doesn’t really work. I like them as original, just as ornaments. There aren’t going to be hundreds of these though – the wheel thrown stuff is more fun right now. 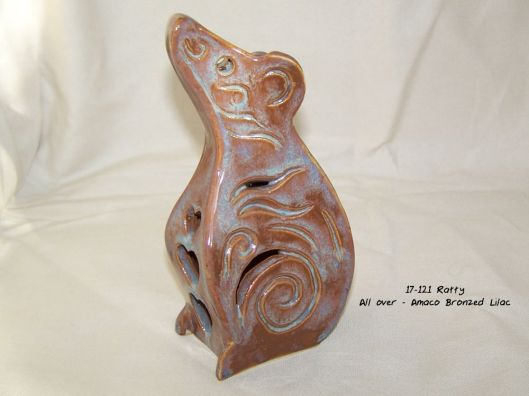 The yarn bowl I showed in progress came out of the glaze kiln today. I just love it so much, it’s my favourite pot so far. I made a video of the opening if you would like to see how it came out.

That’s it for now.

We’re now post glaze firing 5, so I’m a hexpert! Maybe not quite. I’m getting a better idea of what the glazes will do. The current thing to make is carved yarn bowls. They keep me occupied for a few hours each. This is the first one.

Websiteness will be happening soon. I’ve got a whole pile of photos to show off, but need to get around to processing them.

Well nothing terrible happened. Some of the glazes didn’t do exactly what I expected and one pot stuck itself to the clay biscuit I had set it on, but there were no major disasters. I now have a set of test tiles for my glazes, even though the effect on the tile doesn’t always resemble what I got on the pots. Some pots went straight into the bin. 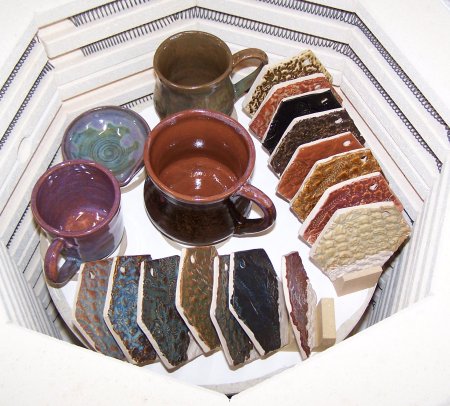 This is my favourite pot – a tea bowl that was one of the first things I made on my wheel. 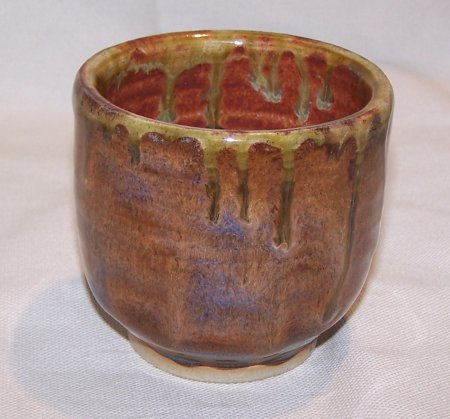 The textured pots were disappointing, with most of the pattern being wiped out by the glazes. I need to carve deeper next time.

And finally I have a spoon rest to replace the teapot shaped one I broke at work.

The new kiln arrived shortly before the Midlands Rat Club Summer Show, so I had no opportunity to play with it until after the show. Then it needed firing in – taking up to temperature whilst empty of pots, but with the kiln furniture. The next job was to paint the base of the kiln and the shelves with kiln wash to protect them from glaze running off pots and sticking them to the kiln shelves. Finally, finally, I got to fire some pots. It takes about 24 hours to fire up the kiln for a bisque firing and let it cool enough to open up, and somehow I had accumulated three full loads of pots waiting to be bisqued. I guess that’s about a kiln load a month, which means the kiln is around the right size for me. 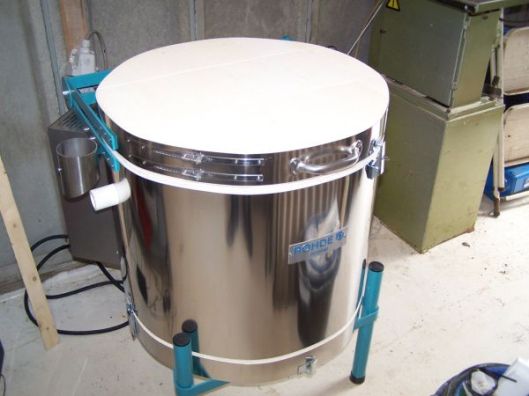 Currently the kiln is full of glazed pots from the first bisque firing, fired overnight and now down to just over 400 degrees Centigrade. I am so nervous to see what is inside. The Amaco glazes I bought can be quite runny, so each pot has a kiln washed circle of clay beneath it in the hope of catching any runs. I also have a test tile of each of my glazes just so I will have an example to keep. Future glaze firings will have layerings of glazes as well, but there is limited space so I will have to do a few at a time. 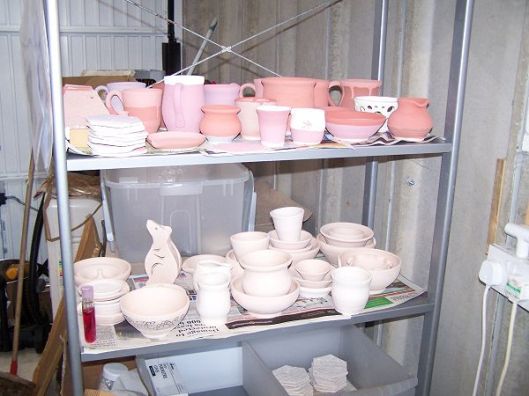 I’ve been and gone and done it. Ordered a kiln, that is. It’s the final admission that it’s time to have a break from pet rats for a while to pursue a hobby that lets me have time off. My Rohde Ecotop 60S is on its way from Germany and we’ve spent the weekend so far making a space for it in the garage. It feels like a big investment, but it’s less than a year’s vet bills for 60 rats when I was breeding rats in earnest.

I just want to say, 60 rats sounds like a lot, but that can include two litters of 10 to 12 babies each and 30 to 40 resident ratties. As I have never re-homed my ex breeders (because they are my pets as well) and also as there are always rats who have been homed out but come back again due to changed circumstances, I found it very difficult to breed selectively with fewer than that. I’ve been up to a maximum of nine cages including nursery cages, which took me four or five hours an evening at half an hour’s freerange each. Urgh. Currently I only have three cages and 18 ratties, which takes me just over an hour and a half and leaves more time in the evening for visiting my mum and for pottery.

So, back to kilns. This one is economical to fire and will run on the current electricity supply to the garage, with two cubic feet of space inside for pots and kiln furniture. Two cubic feet means far more to me than 60 litres, but I have several 35 litre Really Useful Boxes, so envisaging just less than two of those also makes sense to me. We British have such a split personality with regard to metric and Imperial measures. (Does Metric need a capital letter, anyone?)

With a kiln on the way it’s time to start thinking glazes. I’ve ordered a selection because I honestly don’t know what I want to do, so there is much experimentation to come. I don’t know if the colour-blind thing is going to cause problems. Presumably I can find some combinations that look OK to both me and my husband and/or daughter and go with that. No good asking my son, he’s as colour-blind as I am.